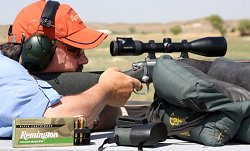 THESE DAYS, many shooters firmly believe in the virtues of “short” bolt actions versus “long” bolt actions, but before discussing details it should be noted that short actions have existed for a long time, but only started to become standardized in the mid-20th century.

The first short bolt actions for smokeless centerfire cartridges appeared much earlier, when Mauser made 1898 actions in sizes for just about every cartridge then available, including shorties of their own such as the 6.5×54 Mauser (not Mannlicher-Schoenauer, a totally different but equally short round).  The short 98 action was called the Kurz, not so oddly meaning “short” in German, but other companies also made shorter bolt actions during the first half of the 20th century.  Perhaps best-known in America was Savage’s Model 20, introduced in 1920 specifically for the .250-3000 and .300 Savage cartridges.

However, most commercial rifle companies didn’t bother making another action for shorter rounds.  Instead they used full-size actions but modified the magazines, the strategy used by Winchester in what is now known as the “pre-’64” Model 70 for cartridges from the .22 Hornet to the .257 Roberts.

However, the definition of “short” didn’t become standardized until a few years after World War Two, with the appearance of the Remington Model 721 and 722.  The 721 came chambered in cartridges as long as the .300 H&H, while the 722’s action was built around a magazine a little over 2.8 inches long, just right for commercial .257 Roberts ammunition.

In the early 1950’s the U.S. military adopted what was essentially a shortened version of the .30-06 cartridge for its new M14 automatic rifle.  Winchester introduced it commercially as the .308, and necked down to 6mm and up to .35 as the .243 and .358 Winchesters.  Was it coincidence that all three rounds fit perfectly in the 722 Remington’s magazine?

Over the next few decades far more short cartridges appeared, many (though not all) based on the 7.62/.308.  Eventually other rifle companies introduced shorter versions of their actions to fit these new short cartridges, and in the 1980’s even the “post-’64” push-feed Winchester Model 70 action got shortened.

During this period the Sporting Arms and Ammunitions Manufacturers Institute (SAAMI) standardized the maximum length of many shorter cartridges so they’d fit the Remington 722’s magazine — or the identical-length magazine of other actions offered by manufacturers from Browning to Winchester.

At first this standardized magazine length certainly made the short-action situation less complicated, but by the turn of the 21st century it started causing problems.  As short bolt-actions became common, many shooters liked ’em due to their lighter weight, shorter bolt-throw, and (theoretically) finer accuracy, due to shorter action actions being stiffer.  But as the popularity of shorter cartridges and actions increased, many shooters started yearning for the muzzle velocities possible with longer cartridges.  This resulted in fatter cartridges being stuffed in short magazines.

This actually began as soon as the Remington 722 appeared, when at least a couple of wildcatters lathe-converted .348 Winchester brass into rimless cases very similar to the present Winchester Short Magnums.  However, commercial companies naturally took a more conservative approach.  In 1965 Remington introduced two “magnums” designed for short actions on the belted brass originating with the .375 H&H in 1912.  The 6.5 and .350 Remingtons were chambered in a new carbine called the Model 600, based on a modified short 700 action.  Remington’s ad campaign promoted them as much handier rifles with long-action ballistics.

Unfortunately, Remington added what might be called Space Age features: 1965 was the peak of the Space Race, when futuristic designs appeared on everything from toys to tailfin Cadillacs.  Several follow-up models attempted to correct the 600’s excesses, but all eventually died out, though the concept of crowding more ballistic performance into a short bolt action did not.

By the early 2000’s so many short, fat, beltless wildcat and proprietary cartridges had appeared that Remington, Ruger and Winchester each brought out their own.  The most popular proved to be the very first, the .300 Winchester Short Magnum, which approximated the case capacity and ballistic performance of the .300 H&H.

However, around the same time a conflicting trend started.  Affordable laser rangefinders became available to the general public in the 1990’s, making accurate field shooting possible at much longer ranges.  All sorts of rifle stuff started being modified to accommodate the long-range shooting trend, especially scopes and bullets.

After the introduction of smokeless powder in the 1880’s, hunters primarily depended on higher velocity to solve range-estimation problems.  High muzzle velocity with relatively light spitzer bullets flatten trajectory considerably out to the range where “guesstimating” distance is possible, around 400 yards — but lasers eliminated ranging error.

Instead, the big problem became wind drift.  Despite compact, electronic anemometers, wind speed and direction had to be partly estimated because it often changes across several hundred yards.  As a result, high muzzle velocity became secondary to bullets with higher ballistic coefficients, which drifted less at longer ranges.  As with velocity in pre-laser days, high BC minimized wind-estimating errors.

Unfortunately, the short-action magazine was standardized long before longer, sleeker high-BC bullets became popular.  Many bullets couldn’t be seated anywhere close to the lands and still fit in a 2.8 inch magazine, and some ended up with part of the ogive inside the case neck.  Often case necks didn’t grip bullets very well, and the edge of the case mouth created chamber-feeding problems.

But the same problem with non-magnum short-action cartridges was often solved by further shortening the cases.  The 6.5 Creedmoor is a perfect example, providing practically as much case capacity as the .260 Remington in a shorter overall case, allowing longer bullets to fit correctly inside 2.8 inch magazines.  (A few companies also alleviate the problem by bypassing SAAMI norms: The Ruger American Rifle’s “short” magazine, for cartridges such as the .243 and .308 Winchesters, is about 1/10th of an inch longer than those of most other short-action rifles.  But this helps even with the 6.5 Creedmoor.)

Do short bolt actions make any real difference for most hunting?  Many hunters think a shorter bolt-throw is much faster, but the big time-eater in bolt manipulation isn’t pulling the bolt back and shoving it forward.  Instead it’s turning the bolt handle up and down.  Most hunters are really slow at this because they rarely practice.  When they do, they usually take a death-grip on the bolt knob, one of the surest ways to “short stroke” the action, causing a failure to feed another round, or a jam.

The only real disadvantage in a longer bolt throw occurs with very short shooters, who must use shorter buttstocks and consequently move their head out of the way when drawing back a longer bolt.  But with real practice, anybody much more than five feet tall can work even a very long-actioned rifle very quickly, believe me.  I’ve seen it done by African professionals using .375 H&H’s and .416 Rigbys, and I’m not bad myself.

How much lighter is a short bolt action?  I’ve weighed a bunch, and so far the difference has always run 3-4 ounces, not much in the overall weight of a hunting rifle.  It’s so small the weights of New Ultra Light Arms rifles in the Model 20 (short) action and Model 24 (“.30-06 length”) actions often overlap due to minor variations in barrels and the hand-made synthetic stocks.  The same applies to factory rifles, especially with walnut stocks.

How much does the stiffness of a short action contribute to accuracy?  It definitely helps slightly in target rifles, but in factory rifles there’s so much variation in barrels that any help contributed by the action is lost — which is why the small accuracy advantage of the .300 WSM doesn’t normally appear in factory rifles.  It can make a difference in custom rifles (I know this from owning and test-borrowing a number of .300 WSM’s since it was introduced over 15 years ago) but the factory rifles I’ve shot in .300 WSM haven’t averaged any more accurate than factory .30-06’s and .300 Winchester Magnums.

Another factor is there’s no standard length for “long” bolt actions.  The NULA Model 24 action is .4 inch longer than the Model 20, as is the bolt throw.  It would take a very discerning shooter to be able to tell the difference, either in carrying or shooting.  However, the NULA’s something of an exception, because few companies make bolt actions specifically for .30-06-length cartridges these days, though the Ruger is one, with their Hawkeye action.

The rifle that started all this fuss about the differences in short and long bolt actions was the Remington 722, whether compared to the long-action 721 version, or other standard bolt-actions of the era, especially the much heavier Winchester Model 70.  The 722 and 721 eventually became the short- and long-action Remington 700’s, but the long action is much longer than required for the .30-06.  Instead it was designed to handle “long magnums,” initially the .300 H&H but eventually the .375 H&H, .300 Weatherby and the Remington Ultra Magnums.   The difference in action length and bolt throw between the 700 short and long is .85 inch, which is pretty obvious.  The difference in weight, however, is (once again) only about three ounces.

NULA makes an even longer action called the Model 32, and some other companies make mid-length actions, very similar to mid-length Mauser actions designed around the 6.5×55, 7×57 and similar cartridges.  The “short” Montana 1999 action on my Kilimanjaro 7×57, for example, is actually a mid-length with a 3.15 inch magazine.

Being a rifle loony, I own centerfire rifles with action lengths from very short (including a CZ 527 in .17 Hornet and Model 70 .223 WSSM) to very long, the longest a CZ 550 Magnum in .416 Rigby.  A few are intermediates, including the Kilimanjaro 7×57 and a .243 Winchester built on a Mexican 98 action, and a couple are rather confused, a Savage Axis .22-250 and Tikka T3 .260 Remington that essentially have long actions with short magazines.  But the vast majority can be classified as conventional short or long actions, and those are just about equally divided in my collection.

However, there’s only one short-action chambered for a short, fat, beltless magnum round, a Model 70 in .300 WSM.  Mostly this is because I eventually found short-action rifles masquerading as long-action rifles something of a PITA.  A good example was my Remington 700 in 7mm SAUM.  It was nicely accurate, and I killed a bunch of big game from South Texas to northern Quebec with it over the years.  But the magazine would not allow longer, high-BC bullets to be seated well out, and while I could have installed a longer magazine box, I’d test-fired too many short-action rifles with longer magazines for short-fat cartridges that didn’t feel very well.

So I got rid of the 7mm SAUM and built a .280 Ackley Improved on a long 700 action.  The ballistics of the .280 AI is just about identical to the 7mm SAUM, but as far as mechanical function the .280 is superior.  The .280 AI is even more accurate, probably because of its custom barrel, far more important than a little extra action stiffness.

However, that doesn’t mean I’m going to give up my other short-action rifles.  I like short-action cartridges for many uses, especially in calibers from 6mm to .30.  But I’m done with trying to cram the ballistic performance of longer cartridges into a shorter action.  Despite the proclamations of advertising geniuses, and shooters who’ve fallen for their hype, I haven’t found any practical advantage in such cramming, whether in weight, bolt throw or accuracy.  Maybe you have, and if so congratulations!  That’s one definition of being successful rifle loony.

John’s new book Modern Hunting Optics and other great stuff can be ordered online at www.riflesandrecipes.com.