Last week, after nothing was hitting my nymphs, I tied on a Clouser Minnow streamer and sight-cast to a large group of feeding trout, with success.
Anyone else fish streamers this time of year for trout? I mainly fish the Arkansas River below Pueblo Reservoir.
Posted By: WyoCoyoteHunter

I fish them a lot for trout in the local lakes.. The river is pretty muddy now..
Posted By: Jerseyboy

I fish wooly buggers a lot for trout now. They work very well. They are easy to fish, too. No fancy technique necessary.
Posted By: garddogg56

I like a Spruce streamer for trout in PA.
Posted By: 260Remguy

The hornberg tied as a streamer with an iridescent mylar body wrap, or with something like "sparkle braid", has been a killer on brookies, browns, and rainbows for me. Big fly, big fish.
Posted By: rmb721

I also use a Hornberg streamer, but with a copper tinsel body.
Posted By: eaglemountainman

Originally Posted by rmb721
I also use a Hornberg streamer, but with a copper tinsel body.
Copper anything has been proven over and over as a serious benefit...

A couple years ago I tied a bunch of ridiculously long articulated streamers for a guide/friend... not castable, but incredibly productive...
Posted By: Tejano

Micky Fin either original or Clouser style has caught multiple species for me. Same or better for the Chartruese/White Couser from bonefish to silver salmon.
Lefty Kreigh is at over fifty species for that one, I might be half way there. The muddler and variations are killers too, warm water cold, salt, fresh, it just works. And it works from on top to dredging it. These and the bugger variations are usually in the box regardless of what I am going after.
Posted By: Prwlr

Slim tied bead head bunny flies have also worked for me both in lakes and streams. Caught my largest trout a 26.5" rainbow with a 15" girth on a black bunny.
Posted By: Sitka deer

Originally Posted by Prwlr
Slim tied bead head bunny flies have also worked for me both in lakes and streams. Caught my largest trout a 26.5" rainbow with a 15" girth on a black bunny.
Black and white Dolly Llama is probably the most used streamer in AK. And for good reason.
Posted By: SS336

My biggest trout to date was caught with this fly. Don’t remember the name, saw it years ago in FF&G magazine. Simple tie, can be weighted or not. Just tinsel body, white marabou wing, red marabou throat patch. Try it, has worked pretty well for me, maybe it will for you. 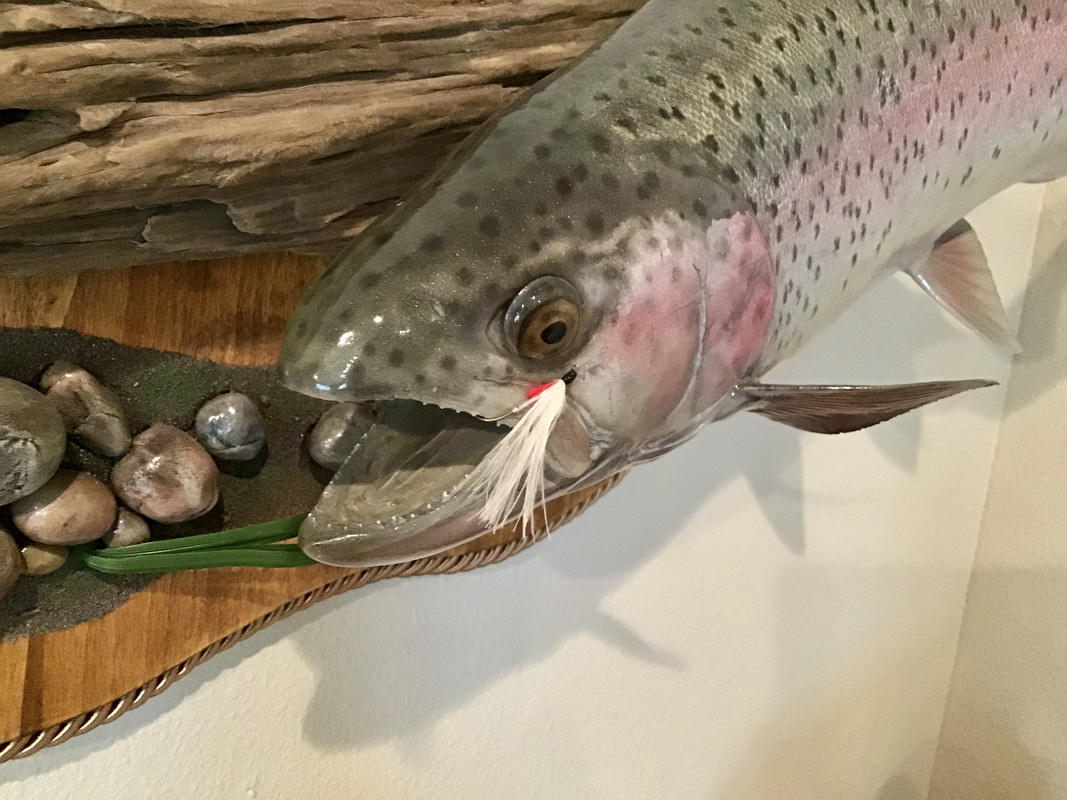 Black and white double bunny has accounted for more of my big fish than any other fly.
Posted By: brydan

Originally Posted by Bighorn
Anyone else fish streamers this time of year for trout?

In one of our local streams, I chuckle every time I go. The Clinch River is known for its micro insects, size 18-22 is the norm. I see guys flailing the water with the micro flys. I normally show up with a 2-4x tippet, flinging streamers, mainly woolly boogers. I get lots of non-purist looks but I bet I catch 2-3 fish to their 1 - and mine are generally larger. A sinking tip fly line with a WB can be magic on that river. I plan to check it out tomorrow or saturday. I should be alone.......