A WILD INDEPENDENCE DAY – WE THE PEOPLE (Custer Co., Colorado)

When the two ladies trying to do the Independence Day Parade for our county were stymied and road blocked over the last six weeks by the two mask-worshipping County Commissioners and the Board of Health, they finally announced that they were withdrawing their application.
During that process at a Board of Health meeting one applicant mentioned that perhaps there might be a protest march instead which caused an uproar amongst the local, control freak, bureaucrats. Oh my, civil disobedience amongst the Custer County sheep herd! Baa, baa, baaaaaah. Little did they know.

Well, word started to spread via email, social platforms and word of mouth. It got so big the Sentinel put an announcement in the paper about it for several weeks: there WILL be an Independence Day protest march on July 4th and if you want to make a statement on freedom and liberty versus tyranny and oppression, be there.
And there it was!

Around 9:15 a.m., July 4th, 2020, the patriots started rolling in. On and on and on. Since there was virtually no organizational control, the participants self-organized into lines of people, cars, trucks, motorcycles, huge semi-trucks, horses and ATVs all along Hermit Lane and every available space within hundreds of yards. The Hermit Lane line went all the way to Highway 69. Every inch of ground was covered with parked vehicles and trailers.
The participants gathered at the north end of Hermit Lane and connected with old friends and met new ones. Tons of veterans
networked with each other.

People came from all over Colorado with plenty of out-of-state plates observed (OMG! Out-of-state agitators!). And to our old redneck eyes, the sight of hundreds of AR15’s and similar man toys brought many tears of joy. The amount of hardware there was unbelievable. For 2nd Amendment fans, it was heaven.

About 9:50 a.m., local army veteran, Pastor Andrew Zeller, mounted the back of a Custer County Sheriff’s Office pickup truck that was there covering the event and delivered a stirring speech and a patriot-driven prayer that was extremely well received by the attendees.
A few minutes after that, Pastor Zeller led the parade down Main Street with a lovely young local lady, Madeline Ballard, next to him expertly handling a snare drum. Directly behind them was another local Pastor, Adrian Washington and his wife, Linda. A citizens’ color guard if you will. Then, off they went, by themselves, leading the joyous celebration of our nation’s independence. Ra ta ta, ra ta tat leading the march, the patriots proudly displaying our American flag. Beautiful. 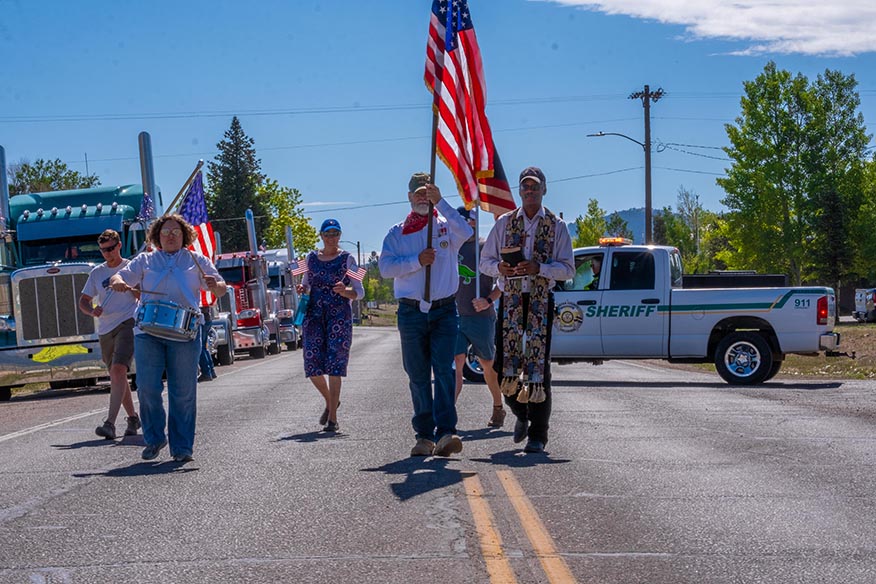 Behind them, waiting on Main Street were four beautiful semi-trucks who followed them, about 50 yards behind. Right after that, a whole army of patriots started the mile-long walk down Main Street. 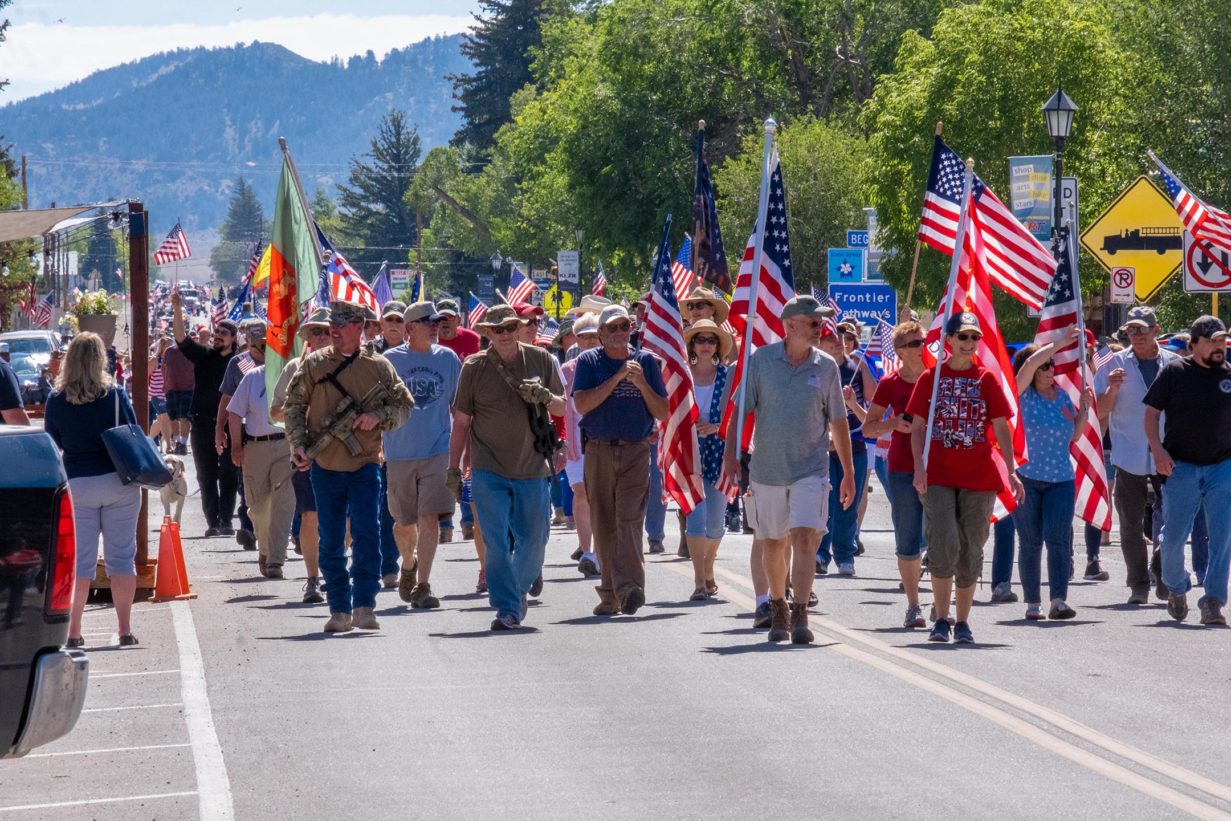 Following the initial section, came a variety of participants with all kinds of vehicles plus a bunch of horse riders. It just didn’t stop. We estimate the parade was around two miles long with approximately 800 to 1,000 marchers. It took almost an hour to finish. 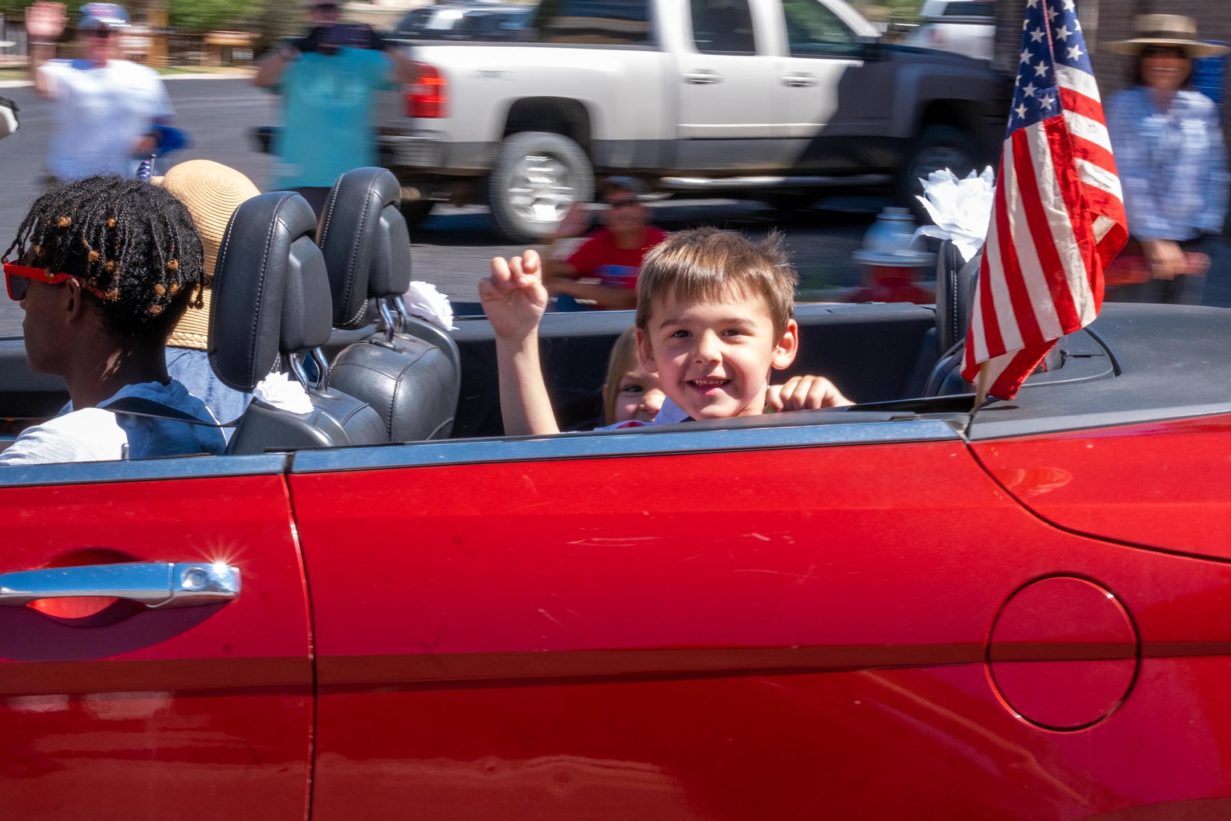 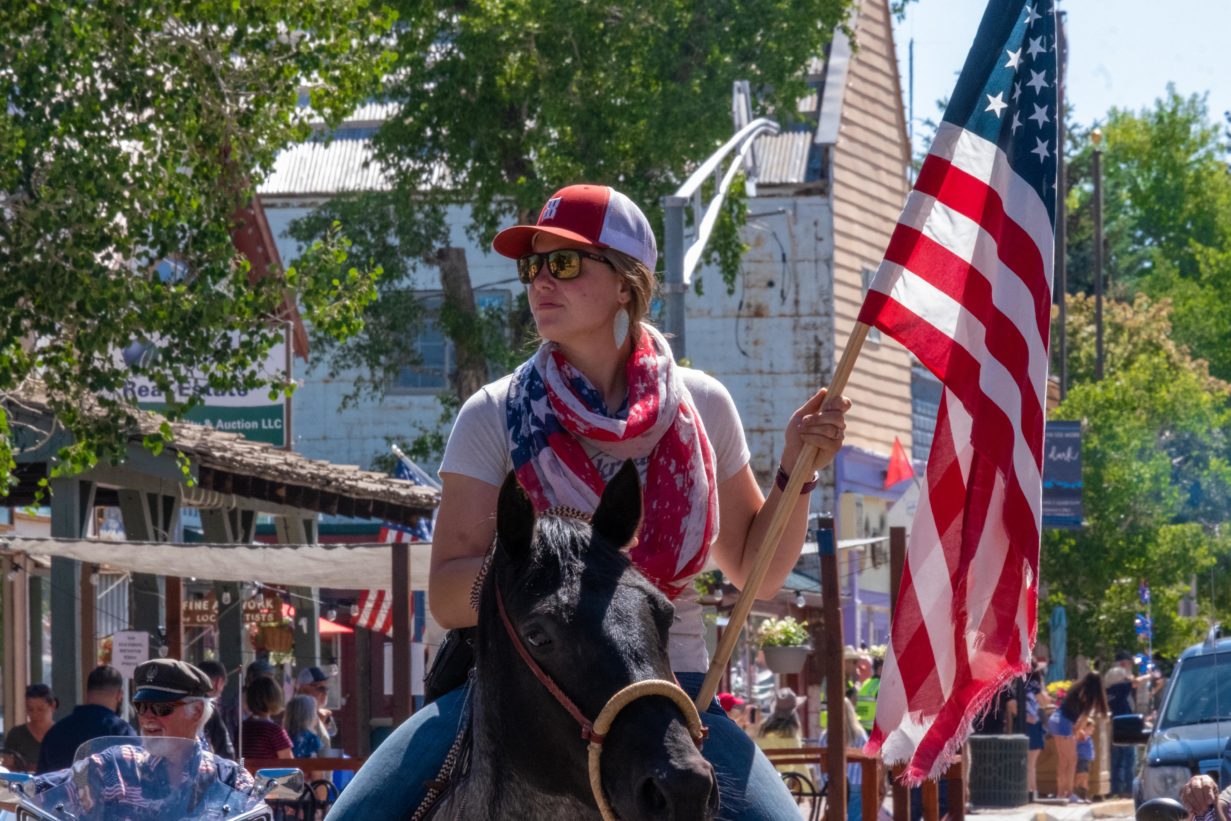 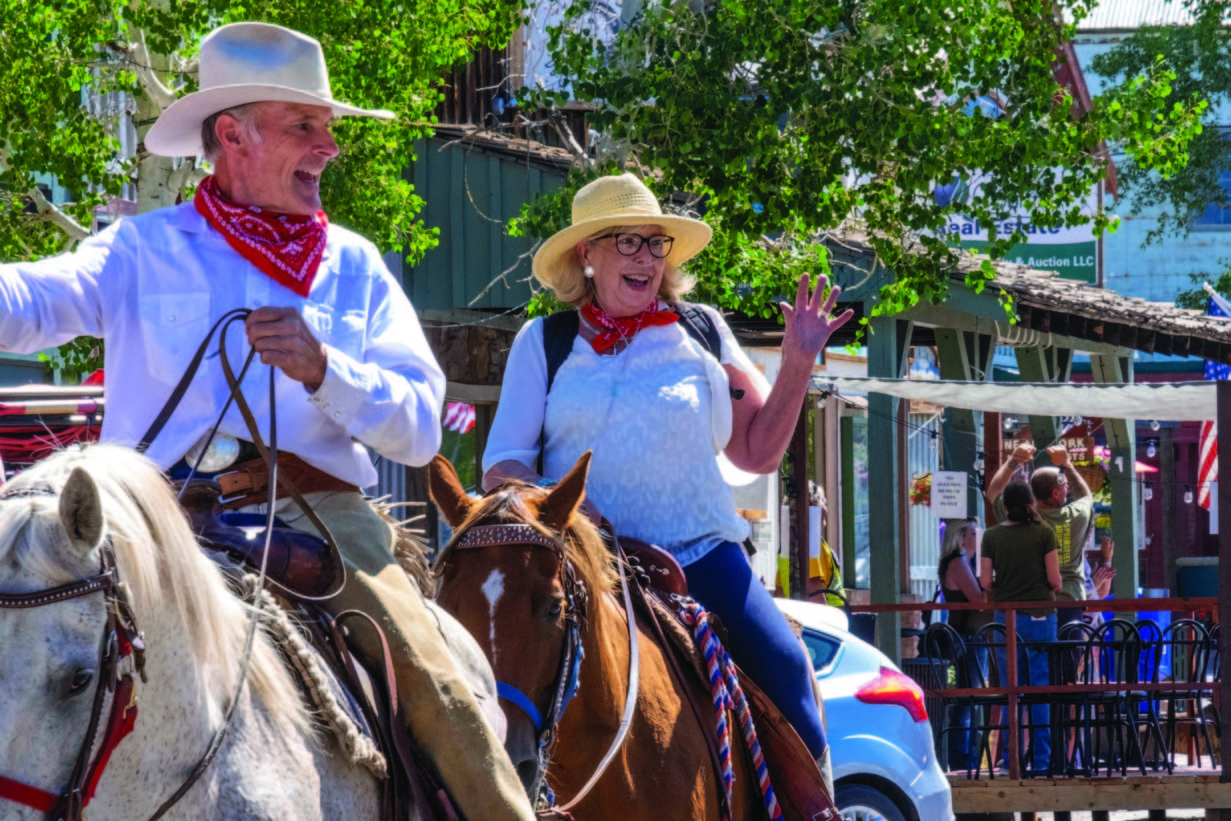 A special thanks to Commissioner Bill Canda who was the ONLY one of the three Commissioners who had the courage and patriotism to honor Independence Day in this march. He and his wife, Joanne, rode their beautiful white horses with Bill displaying a glorious American flag and Joanne passing out a special prayer for our country.

Commissioner candidate Kevin Day also participated as well as HD 60 candidate Ron Hanks. Kudos to all.
A special shout out to our Custer County Sheriff’s Office whose deputies and posse members provided a professional level of protection for the march. Also, kudos to our local Colorado State Police who showed up to help. Well done,
officers. We love you folks.

Many spectators said it was easily the biggest marching event to ever happen on Main Street. Local businesses did well before, during and afterward. They needed the boost after months of unneeded lock down. A big win for all.

Various national patriot news sites/blogs ran stories on the big pro-liberty protest march in little Westcliffe/Silver Cliff in the days afterward. It is the little county that still loves our country.

As expected, Colorado MSM ignored the biggest July 4th event in southern Colorado. They rather cover the left-wing freaks making a scene at one of our local historical statues. The only mention was a brief piece by KOAA news the a week before the event which local Peggi Collins deftly handled in an interview.

It was an astounding, inspirational event that lifted the veil of gloom, doom and out-of-control local and state government. There was hope and real smiles again. It was simply the most amazing day.

God Bless America and God Bless the patriots who made this event happen.


We owned a second home near Westcliffe for about a decade. There's a 4th of July parade every year and there are always a few participants carrying firearms. We sold that second home so we don't get the Sentinel any longer and therefore didn't hear about the controversy. Of course there was no coverage on the local Colorado Springs news either. Too bad. I would have enjoyed participating. From the newspaper article, I gather that this one was bigger than previous events.
Posted By: 12344mag

Best Parade Ever!!
Posted By: slumlord

I haven’t been to a parade in 30 years. Back when they had midgets.
Posted By: FreeMe

We need more of this.
Posted By: AlaskaCub

That’s awesome, I live just over the mountains from there. I had told my wife how they decided to buck the system that would not allow the 4th parade and had changed the name to a rally instead of parade to be able to celebrate it. I had to work or we would have been there. I can’t believe there was zero on the news about this, instead we had to hear about the protests downtown in the Springs and Denver. So sad!
Posted By: ST50

Awesome! We spent a week just south of Westcliffe last year. It turned out to be the last trip for my son in law's Mother. She passed away shortly after that. I would go back at my first opportunity. God Bless
© 2021 24hourcampfire